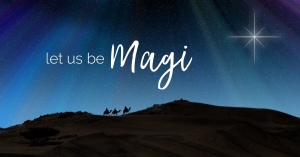 Our Sunday School lesson this morning included the verses in Matthew that describe the visit of the Magi and their gifts to Jesus. A portion of the lesson referenced King Herod and his response to Jesus’ birth. Because the Magi returned home another route to protect the child, rather than reporting the exact place of the birth to King Herod as he had instructed, he ordered the murder of all boys ages 2 and under in Bethlehem and the vicinity. We all know the rest of the story…..an angel appeared to Joseph in a dream, telling him to take Jesus and his mother and escape to Egypt. They remained there until the death of Herod.

I have heard those same powerful words more times than I might count. They are difficult to read, difficult to hear. I can’t recall ever seeing them shared in the secular writings around the Christmas story, though we are very aware of the wider account within the church and as a part of study. Pretty understandable, I would admit!

But today, for some reason, what struck me was the power of King Herod and how that translated to the deaths of small, innocent children! I have always lamented the deaths themselves, of course……but I have been remiss in not giving serious thought as to what his power had to look like, how unequivocal it had to be, even in the face of the social and political times he lived and ruled! Many words and much study would be interesting and personally edifying, but the final result would not change.

I have given a lot of thought to leaders and unrestrained power today. I have considered the ways we sentence children to similar fates in today’s world……all the way from rising infant and maternal mortality secondary to poor or non existent health care resources, prenatal care and education; food instability worsened by changes in laws that were basic safety nets for the most vulnerable in our society; access to mental health care or medical care regardless of age; compassion and care for the elderly who suffer poverty even after long years in lower paying jobs; a minimum wage that cannot support even the basic needs; refugees who suffer persecution and torture refused the hope of freedom and hope in our homeland; immigrant families divided and deported, DACA recipients deprived of a promise that would not only empower their futures but also our collective……lack of effective and consistent assistance to Puerto Rico following a hurricane that continues to devastate their people….and on and on. We don’t want to entertain the idea that all of these issues, and many more, do contribute to deaths…of children, of young people, of adults, of the elderly, of the disabled, of the mentally unstable which often results in the deaths of innocent people. Physical death is quantifiable. The death of hope, the death of potential, the death of a future remain obscure and unqualified.

Those who carried out King Herod’s orders, we assume, had no choice.

We need to become the Magi and take a different route.

View all posts by outoftheashes17

One thought on “Magi”